I’m happy to announce that I have a drawing in the Monsters & Dames 2013 Art Book, available exclusively at Emerald City Comic Convention, March 1-3.  This piece depicts an encounter between the Spider Cleric and a halfling rogue.  The Spider Cleric is featured with an illustration in the 13th Age core book, but the spiders haven’t hatched from their eggs in the core book illustration.  I suppose technically this image is a spoiler!  But that is appropriate for the character.  And speaking of characters, I’m still open for commissions between now and ECCC.  Any of the characters that you have seen in my 13th Age Gallery or on the Pelgrane website or the 13 True Ways Kickstarter are fair game for commission requests.  Yes, even the Devil of Fangs.

In addition to this image being included in the Monsters & Dames 2013 Art Book, it will also be a part of the ECCC Charity Art Auction benefiting Seattle Children’s Hospital.  The auction is held during the convention (maybe Saturday evening?), and not only will this image be available as an 11″x14″ print, I will also include the original drawing of the Spider Cleric.  This is a charcoal drawing on 14″x17″ Strathmore paper. 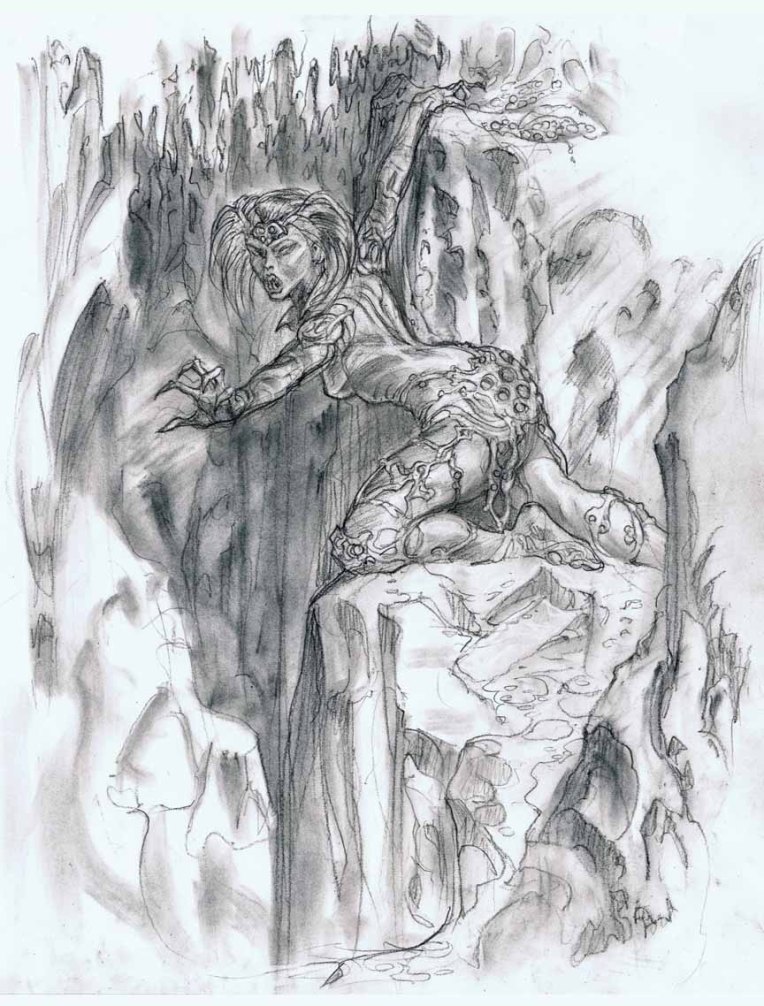 Thanks for your interest and, again, I hope to see you in Seattle March 1-3!

Devil of the Fangs: When the Blessed Emperor pacified the Midland Sea, most of the terrible giants of the deeps swam out into the Iron Sea. But some of the great krakens moved onto land. They converted their deep magic into river magic and became the river devils, armored squid-like monstrosities capable of heaving themselves from one river to the next, always avoiding their ancient home. The very worst of the river devils made deals with the Diabolist to become devils in truth. The most terrifying river devil of this age is the Devil of the Fangs. The Devil torpedoes through the river networks that give it its name in a squid-like form before heaving itself onto land with tentacles shape-changed into taloned arms.

General Ironicus, one of the backers of 13 True Ways, was able to generously offer his support at the Diabolist Pledge Level, and the illustration above is the preliminary sketch of his monster that has been seamlessly integrated into the 13th Age universe.  These are the final days for the successfully funded 13 True Ways kickstarter and therefore the final opportunity to be directly involved in the creative side of the book.  Imagine the street cred you’ll get when all the kids are playing the hot new game 13th Age, and you can brush your knuckles against your sports jacket and say you personally contributed to the 13th Age universe.  Kickstarter…where dreams become reality.  Wait a minute, I’m proselytizing 13th Age not Kickstarter, but in this case the degrees of separation are minor.  Many thanks to those who helped fund the book, and thanks for your consideration as we attempt to meet our stretch goals.

Here’s the pencil sketch of the Devil of Fangs before I started working on it in Photoshop: 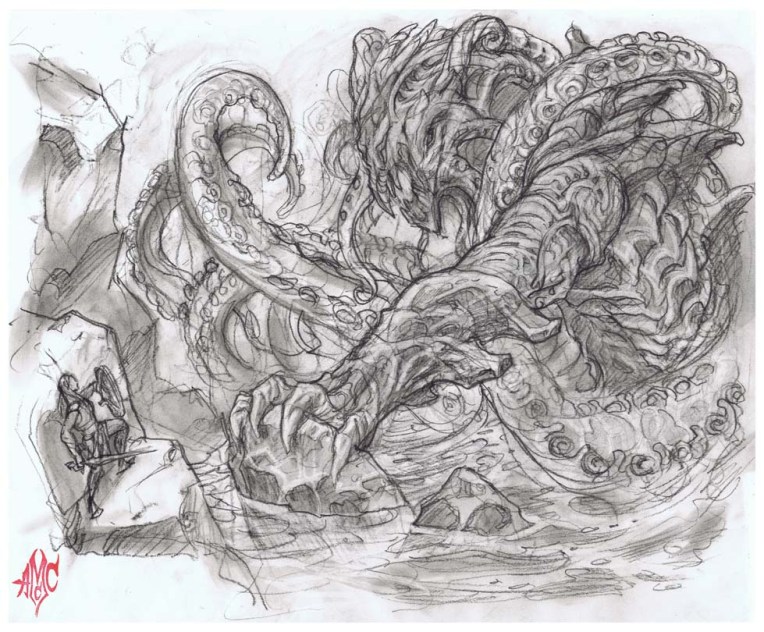 If you want to read more about the conception of this monstrosity go here: Kickstarter Update #12.