Yeah, I’ve taken this Sketch Challenge seriously.  It’s been a terrible distraction, but also a great inspiration and I’ve really enjoyed playing in the sandboxes of my peers.  This week we’re celebrating Jonthan Hickman and Dustin Weaver’s S.H.I.E.L.D: Architects of Forever.  Dustin works at Periscope, and he’s almost always down there when I make my rare appearances.  I do most of my work from home, but I rely heavily on the studio in other ways, and picking Dustin’s brain and looking over his shoulder as he plows through page after page of dynamic drawing has really helped me out with my own efforts.  So, anyway, I wanted to do a SHIELD piece and I knew I couldn’t get away with doing it the “Weaver-Way,” so I took liberties with the Tesla character and his muse?/guardian?/dove woman.  I drew her sort of morphing into her dove form.  Something about it reminds me of Osamu Tezuka’s  Phoenix, and that has to be my subconscious at work because I know Dustin is a huge Tezuka fan.  HUGE.

If you can make out the signature at the bottom right of the drawing you’ll see that I credit Dustin as well as the legendary Jim Steranko.  This is my lack of willpower at work, Dear Reader.  I told myself I wasn’t doing a Steranko send-up when I went into this, but as you can see, I failed miserably.  The conversation with myself sounds quite a bit like the conversation that Tom Waits has with himself on Nighthawks at the Diner, you might know the one, he ends up “taking advantage of himself” or “making the scene with a magazine.”  For me it started with, “Why don’t I just put a little op art behind Tesla?” and before I knew it I’m drawing clocks and shadow dudes.  But in my own defense, I realized I had to put the shadow dudes in because… well, let me put this little diagram together for you.  Take a look…

See?!  Am I crazy or does it seem that we may find out who Steranko’s shadow men are after all these years.  I guess that still doesn’t explain the bike wheels, but Hickman and Weaver’s SHIELD isn’t over yet.  And I’m enjoying it, if you can’t tell.

Here’s the thumbnail of my drawing (pre-Steranko brain seed).  There was something that I liked about this little Tesla sketch so I ended up scanning/enlarging it to the 11×17″ board. 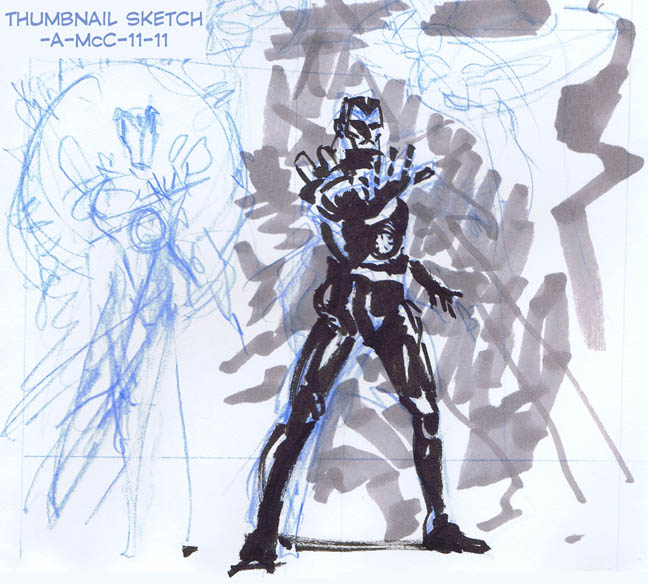